afritekt Designing and Building in Central and East Africa 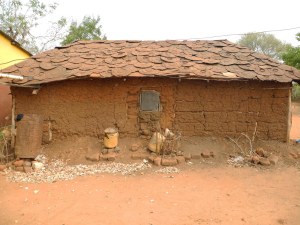 Not your typical roofing system

This little building might not look like anything spectacular, but as I passed by it on my friend’s bike I quickly asked him to stop.  The entire roof was made from what looked like antique circular shingles.

We walked up the path towards the woman in the front courtyard who smiled as she saw us approach.  She lifted herself from washing clothes and we introduced ourselves.  Her name was Amiya.  When I started asking questions about the home, she revealed a sliver of history that told the story of this little building.

Amiya’s husband built the building sometime between 1972 and 1977.  He was working as a laborer on a large construction crew that was repaving the highway between Nairobi and Mombasa.  He would walk the 5 kilometers to the highway every morning to mix tar into the asphalt mixtures and to spread and compact the hot surface.  At some point during his work, he struck a deal with his foreman to purchase all of the leftover tops of the tar canisters for two Kenyan cents each. Today this would be about 1/10 of a USA penny.  He then carried 20 at a time back to his home over the course of two weeks.

The drum tops sit upon a wood superstructure and are fastened together with nails and bottle cap washers.  Roofing systems at that time were still only made of dry grass, so this was a truly an innovation.  The walls of the home, build from mud and wood posts, are in surprisingly good condition for being 35 years old – and probably constitute one of the oldest buildings in the region.

The oldest home in the region

Amiya in her home

Amiya and her family live in Kenya roughly halfway between Kibwezi and Kithasyu.