afritekt Designing and Building in Central and East Africa

A Public Architecture of Flood Protection: The Design and Construction Process

During my time as the Kenya Country Director with Kounkuey Design Initiative I contributed to the development of seven public space projects within the settlement, though directed only the seventh project from inception to completion.  Known now as Site 07, it is one of the largest projects in the KDI Kibera portfolio. It is located at a point along the Ngong River that presents dangerous seasonal flooding risks and sits upon a contested border between the formal and informal city.

Over the course of 18 months I directed the KDI team through a lengthy community-driven design and construction process, coordinated closely with local government offices, and executed construction with a team of local youth.

The project was initiated by residents via an application to the Kibera Public Space Project. (I’ve detailed the Request For Proposals process in a previous post titled How To Start a Project in Kibera.) These residents had established a unified, government-recognized Community Based Organization named Kibera United For Our Needs, or KUFON. Within this group the residents had elected leadership that was representative of the diversity of their neighborhood, and were proposing a series of programs that they had hoped to implement. 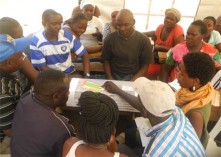 Both the direction of the project and the parameters of the design were determined by the community group in regular weekend meetings, the results of which were then assessed by the KDI team the following week. Together our team used community-identified operations and maintenance challenges as well as practical technical limitations to structure design meetings. Activities such as blind voting, gender sensitive  groups, and children’s design competitions ensured that all voices in the community were heard.

Some components of the design development were not 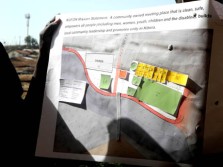 driven through collective decision-making. These resulted from the need to engineer flood control and the availability of financial resources. As our team of engineers gathered data and secured funding, constraints were introduced into the community’s design process.  This allowed some construction to run concurrently with project design. 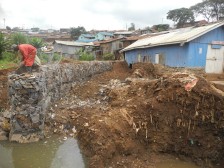 For the primary flood protection, we chose to install a gabion wall: over 50 stacked 2mx1m steel mesh boxes filled with stone. In order to reach our desired finished ground level and to ensure a footing on undisturbed soil, we had to stack these cages four levels high.  This created a total height of 4 meters from footing to finished ground level, much of which to exist below grade.

Halfway down the site, the wall changes to a gabion mat as a less aggressive protective option.  This was necessary as a bottle neck in the river flow occurs at the middle of the site due to turn in the river and a boundary of the formal city. While the sloped design cut into the useable public space, it did provide landscaping opportunities as plants with deep roots are essential to the resilience of the structure.

Even with all of this labor and cost (roughly 25% of our construction budget), our calculations estimate that the Ngong River will still overtop this protection every ten years. With this regular threat of catastrophic flooding, the entire site would have to be designed to accommodate the rushing river waters full of solid waste and untreated sewage. 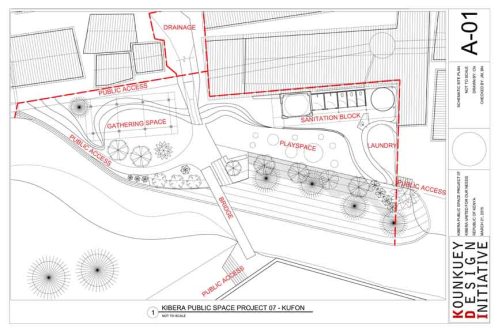 The expected force of rushing flood waters soon began to carve out the architectural forms that would house the community’s list of desired programs. These programs include a public sanitation block (3 showers + 3 toilets), a business kiosk (for selling water and groceries), a large gathering space, and a play space and a public laundry washing area, which are all defined by a secondary level of curvilinear drainage and tiering.  These tiers serve as seating areas that shape the public spaces while creating opportunities for informal businesses to take root. The resulting open spaces are then further defined by crisscrossing circulation paths that guards against land grabbing that also support further development of public space along the river’s flood zone. 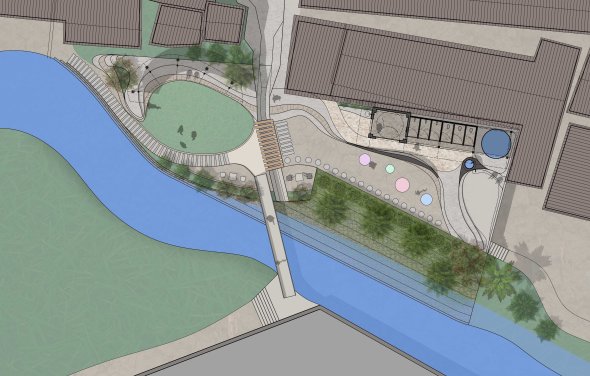 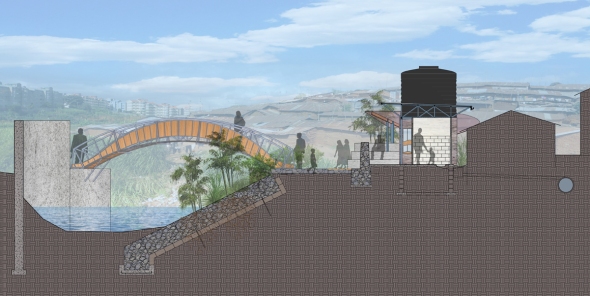 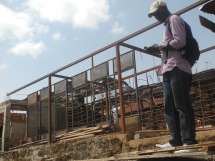 The complex construction detailing of the sanitation block marked a big step forward for me personally and for our whole team.  The rectangular structure consisting of 6 stalls, a business kiosk with an elevated water tank, and a ground level space for capture and storage of rain water, consists of three different structural systems that marry strength with ease of construction. The substructure and business kiosk were constructed with masonry and reinforced concrete.  This base serves as the foundation for a steel tube frame system and roofing. Structurally Insulated Panels (SIPs – though commonly known as “EPS panels” in Kenya) were

then tied into the steel system as partitions.  These panels are still very new in Kenya. Their rapid assembly, ease of integrating plumbing, and cost savings as compared to standard masonary walls are starting to be used in numerous projects around the capital.  We were happy to be the first to use them in Kibera. 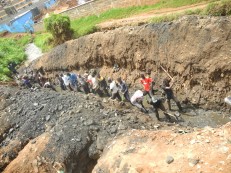 From beginning to end, the process of construction in Kibera, and particularly on this site 07 project, can be described most eloquently as CHAOS.

Constant strategic decisions had to be made during construction to resolve conflicts. Coordination with the ministry of environment that was building a sewer line through the project site at the time of our construction caused delays on the order of weeks, then months.
Private developers across the river had the funds and legal ground to encroach upon the project site, further enabling

mother nature to flood the construction site every few months.  The resulting demolition from these events would then bring about public/private “property” line disputes, as surrounding homes could be reconstructed within only a matter of hours. These challenges and others resulted in erratic construction timelines, at times going from 50 workers one day to only three the next. 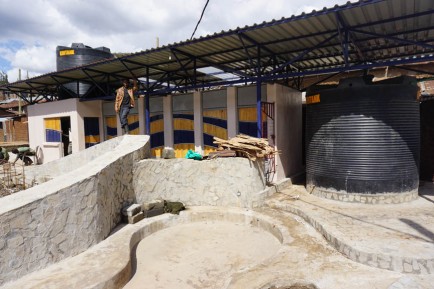 From initial engagements with the community in 2014 to the opening of the sanitation block in early January of 2016, the entire process took about 20 months – and there are still a number of final touches that are needed. We expect that the pavilion roof over the performance space, the construction of the playground, and the pedestrian bridge will be filled out over the course of the coming months. 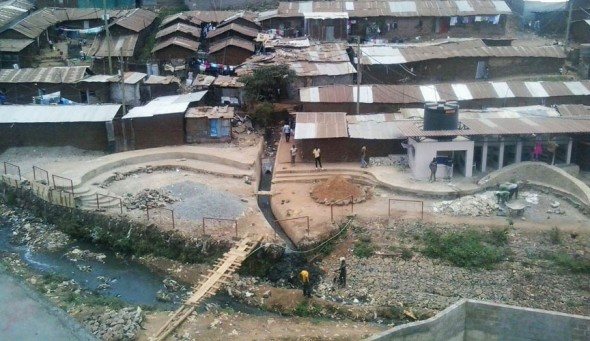 Upon the opening of the sanitation block, responsibility of the project was passed over to KUFON. This includes not only daily operations of running the site’s businesses and ensuring that nightly security for the site is in place, but developing monthly revenue and profit reports to the KUFON members.  This is easier said than done.  To ensure a transparent community reporting system, the KDI team will be working with the group to sustain good governing practices within the group, and assisting in regular bookkeeping meetings.  In the coming months I look forward to publishing a follow up post highlighting both the group’s progress and the strategies that are being implemented by the KDI team.